The conference was extremely well attended – including by many colleagues from the Centre for Trust, Peace and Social Relations – took place in a beautiful part of the world, and was arguably one of the largest gatherings of Maritime Security scholars to date. I had the immense pleasure, with Dr Christian Bueger of Cardiff University, to serve as Co-Chair of the Maritime Security section of the conference where we put together 7 panels and 1 roundtable. Universally I found the papers interesting, the discussions insightful and the company incredibly enjoyable. Indeed as one participant rightly noted, there was incredibly high social capital on display within the Maritime Security section. 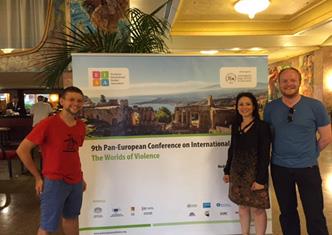 Me (on the right!) with two colleagues from the Armed Violence and Illicit Activities Research Group of CTPSR.

I delivered a paper looking at the growing role played by Information Technology systems in the pursuit of enhanced port security in the UK in the context of responses to international terrorism. I was pleased to get some very constructive feedback on the paper for me to consider further.

During Q and A, one audience member asked me to explain just what, if anything, was distinct about security in maritime ports, as opposed say, to airports. It was a good question and one for which I was grateful there were many other questions for my fellow panel colleagues to be asked before I had to reply, giving me much needed thinking time!

What I found particularly valuable about the question was that it forced me to reflect back on what attracted me to the study of port security and critically evaluate the ‘distinctiveness level’ of my work.

In response I first noted that the level of distinctiveness does, to a considerable extent, depend on the geographic location on which our focus rests. More specifically by this I would argue that for islands, the maritime port, has greater cultural significance that an airport. I’ll be honest enough to acknowledge this is an assessment based on more on instinct than empirical evidence on my part (although I would love to look more at the ‘island mentality’), but I think it is a sound assessment nevertheless. Maritime ports are the gateways in to islands, the broader coastline has a powerful emotive dimension to it around security and collectively this feeds in to and out of a nation’s identity. Just think about the significance of the image of the ‘White Cliffs of Dover’ in UK history and culture.

To conclude it would be wrong to exaggerate the level of distinctiveness between maritime ports and airports. There are common trends towards making these spaces more closely controlled (more ‘closed’), and the day-to-day security practices witnessed may not necessarily look too different; a committee meeting here, search procedures there etc. Yet it would be remiss not to recognise maritime ports do have intricacies, peculiarities (in the best possible way!) and cultural significance beyond that witnessed in airports.

Do you agree? Your views are welcome.